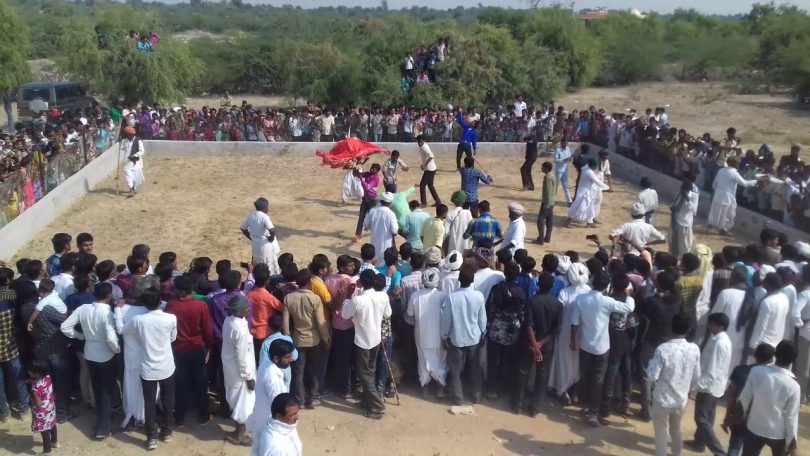 Merayo is a folk dance of Vav taluka located in the border area of ​​Banaskantha.The Thakore people of Hinduism in particular play a part in the Merayo dance.merayo folk dance is identity of vav tharad taluka .Many universities and textbooks have also said about merayo.

It is said that the Merayo dance originated from Dayap village in Vav taluka.The Thakor people of Daiyap village started the Marayo dance for public awareness during the Muslim rule in tharad taluka.

People used to gather by playing Merayo. Then slowly Merayo folk dance began to take place in fairs. The dance was performed at god  Naklang’s fair on the festival of Bhai Beej.

What is Merayo Folk Dance ?

Merayo is called meraiyu in the local language. It is round in shape. Merayo is made by finding garland-like clusters from the grass. Many such clusters are arranged on a bench around a stick. These clusters are known as “nagali”. Peacocks and parrots are planted on it.And between all the clusters there is an arrangement to light a lamp.This formation is called merayo.

A handkerchief is tied over it to decorate Merayo. When a man ties a coconut around his waist as a gift, he has to make a merayo and only then does the peacock parrot start dancing and the lamp flickers in the dark night.

Merayo dance used to happen in every fair in earlier times and four or five merayas were coming but now only one or two merayas are coming.The Merayo dance is now extinct. Today’s generation is not very interested in merayo dance.

If you ever come to a fair in Vav Tharad taluka, don’t forget to watch merayo dance. If you want to see a glimpse of Merayo, this dance is still performed in many villages of Vav Tharad taluka on the festival of Bhai Beej.